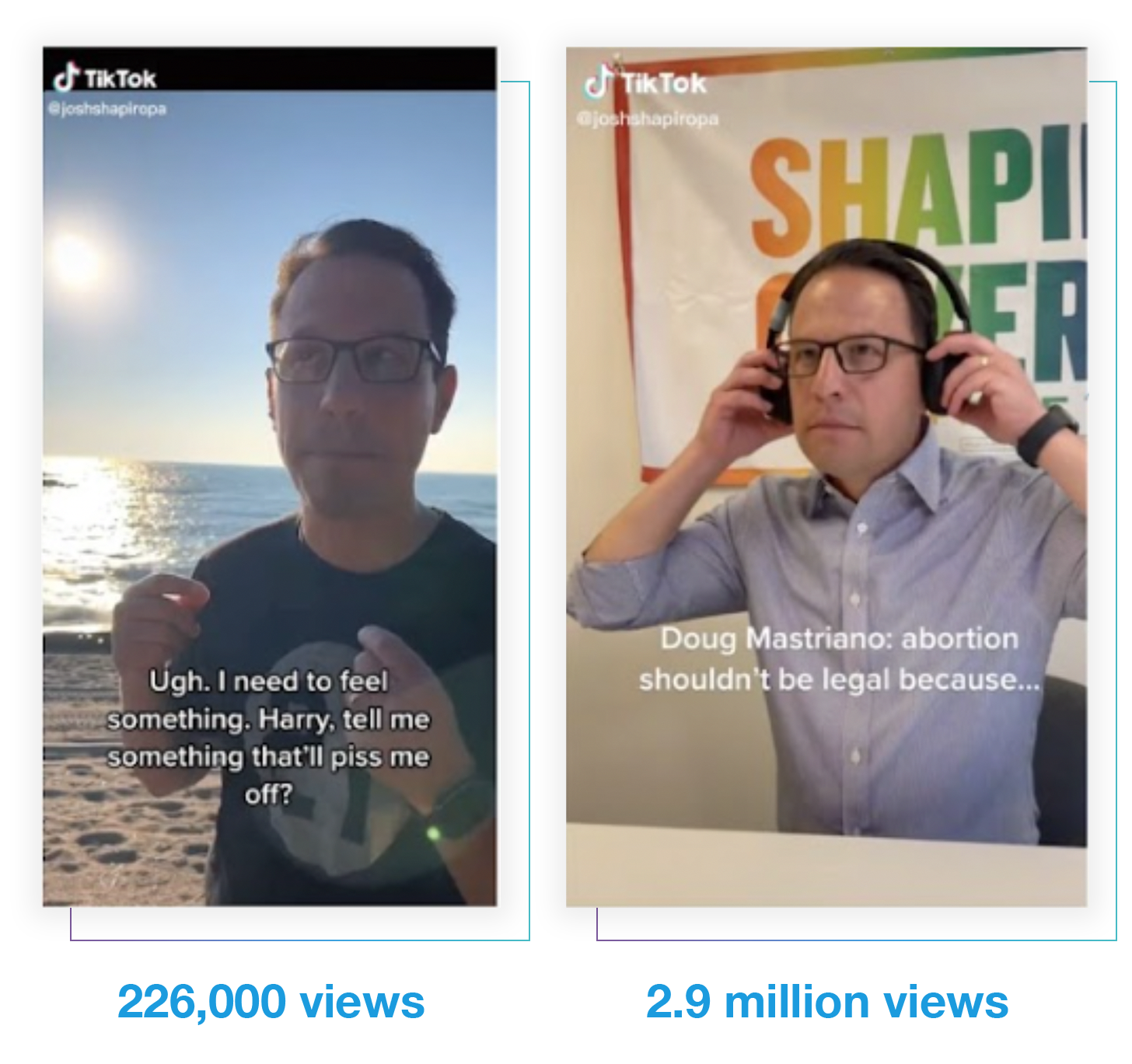 The unexpected success of Democrats this election cycle highlights the importance of reflecting on the digital strategies deployed to understand what worked and what didn’t. After taking a look at our most common strategies, we have put together these four takeaways to help your campaign or political advocacy organization plan for the next cycle.

There is no better example of this than Senator-elect John Fetterman’s campaign. As we’ve previously discussed, Fetterman’s digital team took on a new strategy when it came to their social media.

Helmed by Sophie Ota, who understood the desires of young people to see authentic, online political engagement, his campaign excelled at publishing content specific to each social media channel, depending on which audiences they wanted to reach.

They were able to excel on platforms like TikTok, where Fetterman focused on tapping into the trends of the moment to appeal to Gen-Z’ers, and in his success gained 242,300 followers and 3.6 million likes.

While this content certainly had national appeal, our analysis showed it generated the most engagement in Pennsylvania.

The success of this style campaign can also be seen at the gubernatorial level, where Governor-elect Josh Shapiro was able to navigate the same strategies online. His campaign also leveraged platforms like TikTok to appeal to younger voters, gaining 65,300 followers and 1.1 million likes, which ultimately translated into support at the polls.

Since 2004, when campaigns began to actually invest in digital, the effective use of email outreach has been a constant discussion. Campaigns initially understood email to be a direct line of communication to distribute campaign messaging among supporters. Though in recent years, there has been a shift, and it doesn’t seem to be popular with the public.

The constant bombardment with donation requests and messages saying that ‘democracy might end as we know it’ does not encourage or motivate action from constituents. It can raise short term cash, but doesn’t help generate the sustainable actions, like volunteering and voting, that are needed to win campaigns.

Instead, try diversifying email content similar to social media content, and tell the campaign story. It’ll take some planning to avoid going to the email ATM a few times a week, but it’ll pay off in the long run.

Democratic organizations began in earnest to deploy microinfluencers in 2020, but this cycle saw the practice embraced by more PACs and campaigns than ever. People First alone worked with 15,000 creators this year to create content for a variety of advocacy and political organizations.

Handing the mic over to local, trusted messengers entrenched in the communities you are targeting generates above average engagement rates; it’s our modern day door-to-door.

During the Vote Like a Madre campaign, Latina mothers pinky promised they would protect the environment and vote for pro-climate candidates in 2022. Through 152 local influencer posts, we were able to reach over 8 million people with an average engagement rate of 7.3%. That’s 5x the industry average of 1.5%, based on calculated averages from the latest social media benchmark reports from Hootsuite.

In a campaign for Governor Tony Evers in Wisconsin, creators spoke openly about their fears for the future of Wisconsin if Governor Evers was not reelected. With 84 pieces of curated content from microinfluencers, we were able to reach over 400,000 people with an average engagement rate of 9%.

And again, in a Pennsylvania Get Out The Vote campaign, microinfluencers spread support for Senator-elect John Fetterman and Governor-elect Josh Shapiro. The 80 posts reached nearly 800,000 people with an engagement rate of 6.2%.

This strategy of leveraging microinfluencers can be an extension of core campaign messaging that generates specially curated and tailored stories for distinct target audiences.

And last but not least,

With increased difficulty from platforms like Meta and TikTok on ad placement and cookie restrictions, social media ads have become a less efficient place to spend advertising dollars. Diversifying paid media across social, programmatic, and search, using 1:1 voter targeting is key to reaching your audience, regardless of platform.

There are many emerging ad types to explore, and with 1:1 matching you can reach your target voters wherever they are.

The overarching takeaway: decentralize your digital communications program. By expanding paid media channels, diversifying email content, telling authentic stories on the right social channels, and empowering microinfluencers, you can connect with your targeted audiences in more meaningful and effective ways.

How can we help your cause?